Found this interesting article where some experts argue that Sydney train problems could be fixed by halving car registration and removing tolls. It reverses the normal mantra in favour of active and public transport. My take is that the article is asking the wrong questions.  The key question that should be asked is “Why do we continue to allow Australia's mega cities to grow instead of creating new, properly planned cities?” This post looks at other questions that might be asked if we want to make the transport systems of Australian mega cities more workable.

The transport systems of mega cities like Sydney are becoming more and more onerous as population and area grows. Commute time is growing and growing. It is a particular problem for people who do the service jobs in places like the CBD. For these people the gentrification of inner city ex working class areas means that low paid service workers have to travel a long way to find accommodation that they can afford. (Years ago the SMH commented that teachers and police who work in the CBD have to go over 40 km out from the CBD to find affordable housing.) Part of the problem here is that we have lost the moziac of high and low income residential areas and replaced it with something that drives low income people to the fringes of the mega city. (In the past places like Balmain provided places where low income workers could live close to where they worked in the CBD areas.

Transport systems have to have enough fixed and mobile capacity to cope with peak hour traffic. The following graph is for travel to the Brisbane CBD but the general pattern would be true for any of the big cities in Australia. 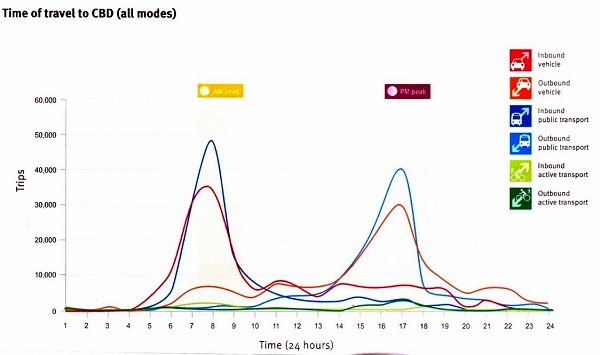 SOME QUESTIONS:
The above problems inspired the following list of questions:
Some of you may want to add to the list or comment on some of the possibilities.